[So i thought I posted this a month ago and it’s been sitting in my drafts. Oops.]

Ok, I wrote a little thing recently about coming to terms with fear. Thought I’d share here. (but hey, don’t copy this one without my permission. Just sayin’.)

I don’t know how I became a person who does things. As a child, I remember being afraid of everything; I didn’t even want to climb up to the diving board platform because I knew I wouldn’t jump off. My biggest enemy was something called Public Speaking, something that didn’t intimidate me when I was very small but strangely enough shrank me into silence as I grew older. When I started realizing I wanted to do things like be a lawyer, or a teacher, or just someone who wouldn’t pass out when asked a direct question, I knew I had to do something to push back against Public Speaking’s humiliating gaze.

As I currently work as a professor, and I entered a “people profession” called counseling, somewhere along the way I successfully vanquished my foe. Yet knowing myself as someone who had to do battle with this beast, and knowing how that fight took most of my life, I have not lost the sense of myself as someone who once lived regularly with fear. Fear hasn’t disappeared from my life; rather we’ve just learned how to live together peacefully.

So when someone calls me, “brave”, I get confused by that. I recently had an experience that several people have called a “brave moment,” and this feedback set me to wondering about how fear and bravery were working in my life and what they might be trying to help me out with this time. As I’ve shared the following story with others, particularly students who are new to the profession, I’ve found that talking about these tales of fear seem to be having some effect on other’s attempts to bolster bravery. Thus I offer this story here in the hope that something can be gained from my experience, or if not then at least my students can get some joy at seeing their professor “freak out.”

Some time ago I attended a workshop led by David Epston. He was introducing to us some highly innovative narrative practices he’s been developing for some time. As per his style, we spent a great deal of time examining recorded interviews and transcripts to gain insight into these practices and learn more about philosophies influencing his work. I find it all exciting, even though by the end of the day my brain declares itself full and needs to take a big long nap afterwards.

After sharing session material demonstrating what he refers to as “insider witness” practice, David indicated that he had not been able to get recordings of a particular aspect of this practice. Now being a professor in a counseling program that requires regular recording of all client work conducted in our clinic, I heard his problem as an issue of technology. He is unable to get a recording? I can get a recording. We record everything. I was also in a position of supervising students in the clinic, which meant several possible opportunities to try the practice he had demonstrated. So I approached him and naively offered to get a recording of what he was wanting. He jumped at the offer, and when I later returned home and back to work, I started to set up the kind of interview sought after.

The practice I needed to demonstrate involved two stages; the first where I would interview a supervisee with that supervisee portraying the client. The second stage involved me interviewing the client, who would see the recording of that portrayal, about the portrayal. As luck would have it, I had two students working with a couple where this practice seemed possible and of benefit; we presented the idea to the couple and they agreed. All was ready! Now we just had to conduct the actual interviews.

Prior to meeting with my supervisees, I had read several of David’s transcripts and talked with my students to help prepare them for the task at hand. On our arranged meeting date for the recorded interview, we set up our room for multiple recordings (backups in case one recording failed), had a short chat amongst ourselves to get ready, and then pressed “record.”

About 8 minutes into our interview, I was hit over the head with a hammer of a thought: What am I doing? It came crashing down on me that not only had I never attempted the kind of interview I was now in the midst of performing, I was also going to share this recording with David – the God of Narrative Therapy, and he could strike me down if he wanted. Panic washed over me as I thought, of all the times to share your work with someone, you picked something you’ve never done, and you’re going to show it to the one person who could see just how much you don’t know? Gandalf suddenly appeared and shouted in my little face, “You shall not pass!”

Instantly I was catapulted back to being 14 years old, in my high school speech class, standing in front of an audience of cold, disinterested pasty-faced adolescents who had no idea who I was and also didn’t care. Would my speech, scribbled on disorganized note cards shaking ever so slightly in my hand, die in my mouth before the words even came out? Would the students simply stare at me slack-jawed or would they scoff loudly at my mistakes? Would I prove to the world I really was as foolish as I felt?

I don’t remember what that first speech was about. Likely something mundane like rocks or tennis. But what I do remember was being surprised at the sound of my own voice, how loud it was and how at some point all the dull faces became awake. There was even a laugh somewhere, maybe more than one, at a point where it was supposed to be funny. I felt like I stood in front of that room for two days, yet I am sure that speech only lasted about 5 minutes.

It was not a perfect speech. Some of the words needed work. But afterwards I remembered feeling the fire of excitement with the kind of racing heart you get after driving a car ridiculously fast and managing to not crash in to anything. I don’t think I heard a single speech after mine, because my pulse was pounding in my ears and my brain was shouting, “You’re ALIVE!” Did someone just say, “hey, not bad”?

Fast forward to the next speech, 10 minutes, one where I had to actually perform something like a magic trick in front of the class. I don’t remember the sweaty panic, the hyper-awareness, or the breath stuck in my throat; rather I remember starting to actually enjoy myself when again my voice boomed to the back of the room and more laughs (in the right places) replied. I might actually be able to do this, I remember thinking. I might even someday grow to like this. This crowd is actually applauding as I walk off the stage.

Flip the channel back to myself staring blankly as I sit in front of two supervisees who are trying something completely foreign to them. One of the reasons they have agreed to walk into this unknown territory is because they trust I won’t leave them wandering in the dark on their own. I’m not hearing what they’ve just said, my head now full of doubts like, “what am I supposed to say,” “how did I get myself into this,” “what if I ask the wrong question…” The same kinds of overly self-conscious appraisals I remembered asking myself when I was a student sitting across from a client for the first time.

But as the panic transported me to earlier fights with fear, it also brought me to the companion that I found in those experiences: Reassurance. It reminded me that I do know how to hold a conversation; my work has been watched before; I don’t know what David would say but I do know what I would say; and if it all goes belly-up we’ll just try again. My many tussles with fear also gave rise to the many skills I now had to put fear in its place and do what I came to do, including the biggest skill of offering compassion towards my own mistakes. I did not know what I had entered into but that did not mean I had no right to be there.

My ears tuned back in to my supervisee’s words, and I opened my mouth. Words came out, and the interview continued. Upon reflection, I don’t think it was the best interview I’ve ever conducted. But it also wasn’t the worst, and in the end we found our way. No one died; the room didn’t catch fire. When it ended, we all breathed a sigh of relief, not because we had failed miserably but because something indescribably cool had taken place.

A few days later when I met again with the students, we talked about our experience of the interview and I shared my panic moment. They both expressed having no idea that had taken place. When I looked back at the video of that session, I saw the moment when panic started – and in real time that moment ended after about 75 seconds. Years of my life were re-experienced in 75 seconds.

We later record the next interview which included students, clients, and myself. Still uncertain, yet no panic intruded upon me this time, and this interview required even more invention than the prior one. David and other practitioners viewed the videos. Much feedback was provided. No one said, “You suck.” The good and the not so good were commented on, and many, many suggestions were given. The ideas were invigorating, and I found myself in a curious reflective experience. Without meaning to, these comments had the effect of showing my professional self to my personal self in a way that hasn’t happened to me since I was in my doctoral program nearly 15 years ago. The picture presented to me was intriguing, not because it depicted someone who gave a perfect session but because the image showed a person who made some effective attempts, took some missteps, dealt with the unexpected, and tried a few risks. These are the same hopes my high-school self had when she first rebelled against fear and signed up for speech class.

While I still hesitate to call myself, “brave,” this experience had the effect of showing me where I’ve been, where I am, and where I’m still trying to go. It has been rejuvenating and refreshing, a good antidote to the tediousness that accompanies adult working life. I realized that the once overly-methodical, reluctant to move little girl now shares the stage with another version of herself who willingly, spontaneously, bumbles into experiences just like the one described here – experiences that let both of us see just how much potential really exists in any given moment. Improvisation writes our script in the play of Not Knowing, and I can’t wait to see where the next act will go. 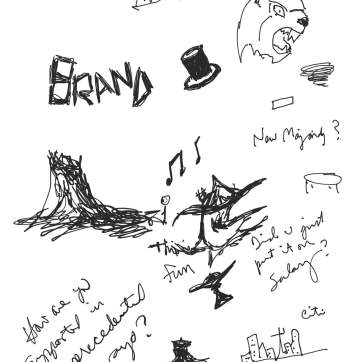 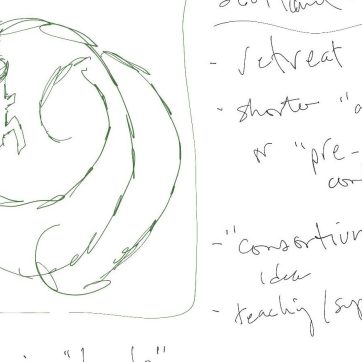